After watching the Rugby final between England and South Africa with the somewhat inevitable ending of us losing we wrapped up for the walk into Leek.

And the sky did leak ! It began to drizzle a little at 9am but by the time we left Homer it was raining steadily, thankfully it was quite mild and unlike the South of England we didn’t have strong wind.

It was a mile walk downhill into Leek which is a pleasant town to visit, it is known as The Queen of The Staffordshire Moorlands and is a former textile town evidenced by the mill buildings that are still standing. It has a good range of small shops in the High Street and an indoor market in the Butter Market, outside this there were stalls selling antiques/bric-à-brac. The town is also well serviced with the well known supermarkets. We enjoyed for lunch a bowl of broccoli and cauliflower soup with baguette in on of the several cafes that are here.

A few days ago I discovered a small hole in both the heels of the walking trainers I have taken to wearing, this was annoying as although I bought them a year ago it was only on our recent trip to europe that I started wearing them. The outer layer of the sole had punctured and underneath it was cellular to give an air cushion effect as you walked. Well today that hollowness turned itself into a pump and as I walked in the rain it gradually drew the water up into my trainers making them useless, so I had to make a visit to the Clarke’s shop where I invested in a sturdy pair of shoes, unfortunately because of the state of my socks I couldn’t wear them straight away and had to walk back with wet feet.

Peter also had an expensive trip into Leek as Alison declared his coat was scruffy and he was dragged into Millets to purchase a new waterproof, he also splashed out on a warm flat cap, Alison restricted her spending to a bunch of bananas, I did treat Michelle to a pair of inner soles for her new boots. 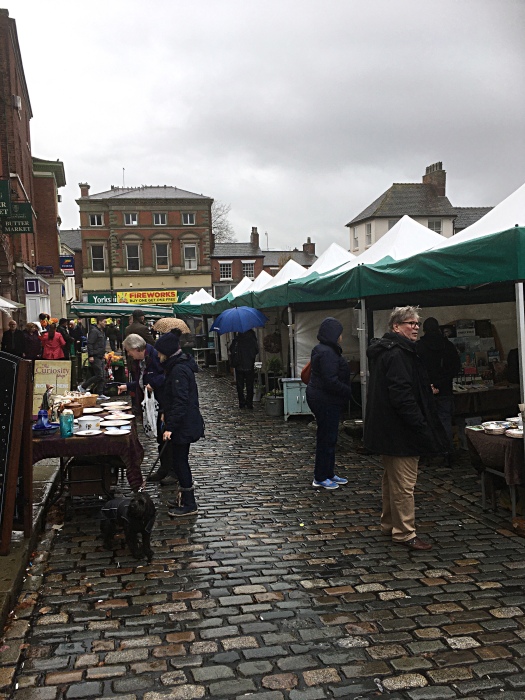 Now as I sit here writing this blog after our evening meal and before we go to join Peter and Alison for drinks nibbles and a chat we are being entertained by fireworks being let off in the distance to celebrate bonfire night. Thankfully Layla ignores them completely.