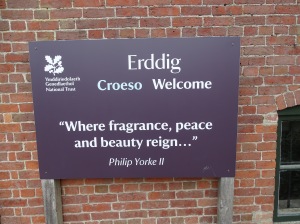 Today we visited Erddig Hall a National Trust property close to Wrexham. The property was owned by the Yorke family for over 250 years and is situated on a 1,200 acre estate, with a grade 1 listed formal garden following an original 18th century design.

Like many of these properties it had gone into total decline until the NT took it over, however the Yorke family had hardly ever thrown anything away and there were over 30,000 objects stored away in barns and the few dry areas of the house that still existed. Below stairs shows the life of the domestic staff with an interesting range of photos and descriptions, showing the Yorke family’s high regard for their servants. Upstairs the rooms show the lifestyle of the Yorke family who were comfortably well off but didn’t appear to entertain on a lavish scale.

The outbuildings and gardens are fascinating and they have a variety of approx 150 different types of apple trees, at the moment in the autumn you can purchase the apples they have harvested.

After leaving Erddig we drove into Wrexham which is the largest town in North Wales and dates from the bronze age, the Romans settled there and founded a brick work and slowly over the centuries it developed into an important market town. In the 19c the railway arrived and this created new work and development of the iron and steel making industry, coal and lead mining, quarries and brickworks and a brewery. In the 1930s there was a terrible mining disaster killing 261 miners and during this decade industry went into decline. The town is now home to Glyndwr University, it has extended its shopping facilities with a new shopping centre giving shoppers the opportunity to buy from traditional small businesses to large stores.