When you spend 22 hours confined in a car and a cabin on the ferry with someone with a streaming cold and hacking cough it’s no surprise that a few days later both Michelle and I have been suffering with my son’s germs and he of course has got over it.

On Friday we drove to Bordeaux airport to pick up our daughter Sophie and her friend Mitch, it’s unfortunate that the plane was due to land at the start of Friday afternoon rush hour so even though the plane landed early our journey around the Rocade was stop start, and the journey back took at least 30 mins longer than the journey there.

Behind our house is a small drainage ditch that takes some of the rain water from the lane outside and a field opposite, two years ago in its wisdom the local council cleaned out the ditches and altered the flow of water so that now when it rains heavily we get a much larger flow of water in our ditch. Unfortunately it can’t cope with the excessive water and overflows onto and deposits mud spoiling an area where we have spent a considerable amount of money laying down tonnes of limestone chippings It also reaches the walls of an extension at the rear of the house, so action was required and this is where my son Matthew, the cold giver, comes into his own as he is much stronger than me.

He has dug down into the ground in front of the extension, through thick clay in places, and we have formed a barrier filled with tonnes of concrete to keep the water away from the extension. We will also try to deepen the ditch a little but it isn’t easy as there isn’t much of a slope to carry the water away.

As always guests are keen to offer their time and energy in the upkeep of the house, especially if it’s a fun thing, so it is no surprise that Sophie and Mitch were happy to volunteer to take on some grass cutting.

On Friday night we decided to participate in quiz night at our local restaurant, a popular night for the expats in the area. We have a few times over the years, with different friends, participated in the quiz and if nothing we are consistent, again this time coming last by one point, however we won the booby prize.

Sunday morning even though we were dying with cold and it was raining we decided to head to a vide grenier at St Astier, unfortunately the weather had also put off many of the stall holders and there wasn’t a lot to see, I did however spy and buy what I think is an old French bugle, which will be converted in some way or other to a different use. 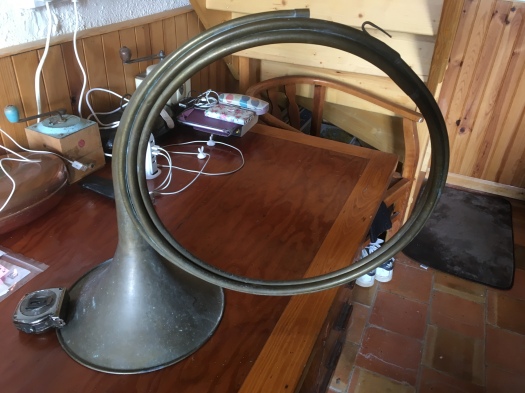 Even though it was raining heavily we had a walk around the town and down to the river which was in flood, we had to prevent Layla going for a swim. 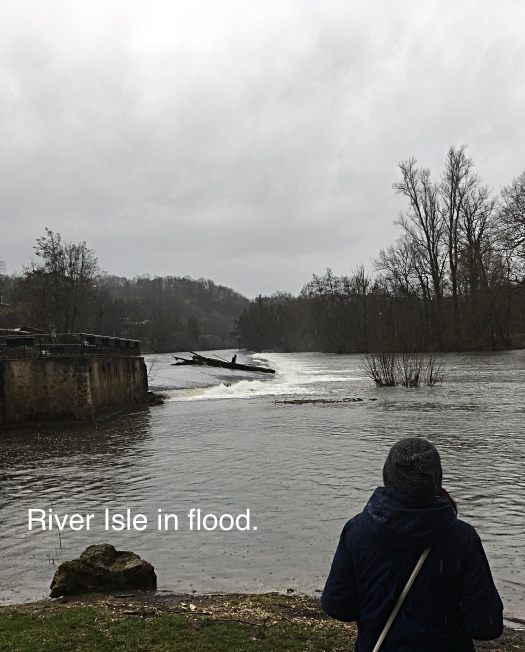