Not wanted to be stressed and in a rush we set off early this morning, 7.30 am. At 7.33 am we were parked in a side street trying to sort out the rear near side indicator that wasn’t working, this had happened once before in Germany, quick removal of the lens, a wriggle of the bulb and wire and loh and behold it came on. Sadly however it wouldn’t go off!  After three more attempts it worked OK but I did manage to drive the 167 miles to Portsmouth without indicating left.

We filled up with fuel locally and again at Sutton Scotney services where we spent 45 minutes with a coffee and a snack.

We arrived at Portsmouth without incident at 12.15 where we queued for ages at the ticket booth, there are lots of caravans on the move and they were being measured with a trundle wheel to make sure they weren’t longer than the owners had claimed!

We hadn’t packed the kitchen sink but had taken a new front door with us and I’m pleased to say everything stayed where we had packed it. 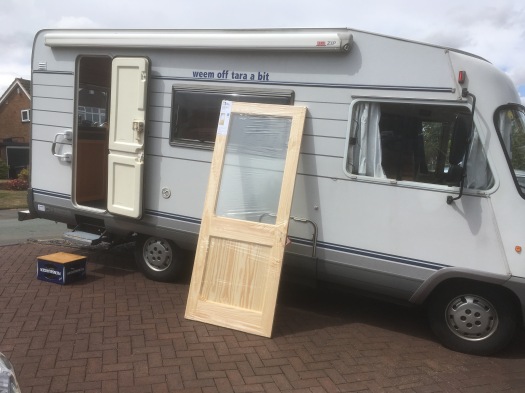 The ferry today is the Mont St Michel, an old favourite of ours, cabin7102, next to information.

It’s a large ferry, 161m long with a capacity for 648 cars and 2123 passengers, today the car decks were rammed with lorries, caravans etc we will be one of the last off from our car deck. We were 20 mins late departing but they will make that up on the journey, now for a cold pint before a siesta. 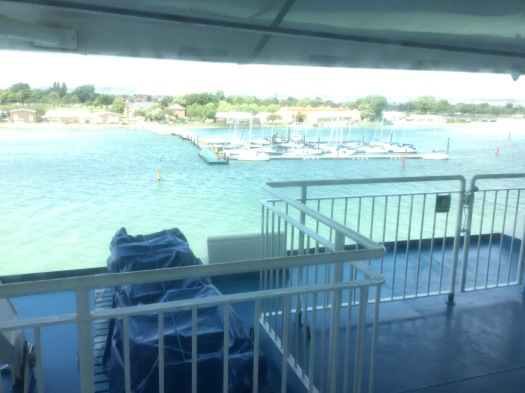