The journey north today showed the changes in scenery, large fields giving way to smaller ones, the appearance of herds of cows, troupeau de vache, the soft yellow stone of the houses in the south changing to a darker colour and gone are the red clay roof tiles to be replaced by slate. The first hints of autumn are felt as it is cooler in the mornings and late evening and leaves are changing colour.

Today we are in an aire at The Museum Memorial De La Bataille de Normandie in Bayeux.

We wanted to see the Bayeux tapestry and the famous cathedral and this aire seemed which is close to the centre was a good place to stop, as luck would have it and unbeknown to us, this weekend is European Heritage Weekend and entry to museums is free! This save us 30 euros in entrance fees. 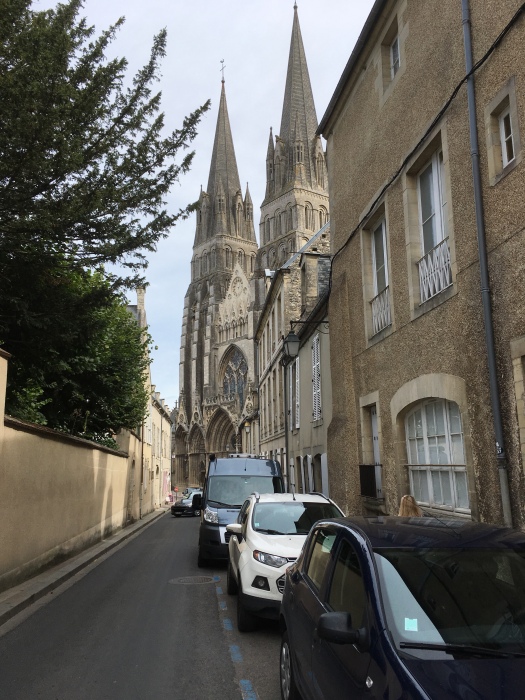 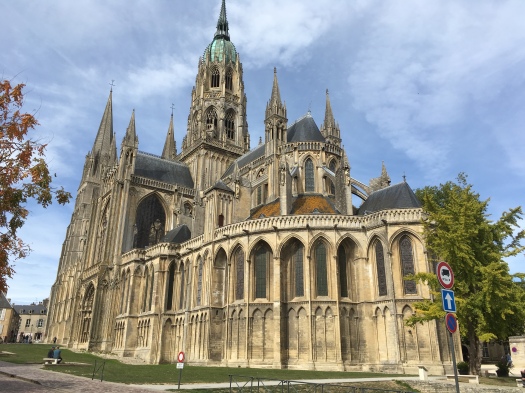 Bordeaux Cathedral is the seat of the Bishops of Bayeux , it was consecrated in July 1077 by Bishop Otto the half brother of William the Conqueror, Duke of Normandy, who was in attendance. It was here that Harold swore an oath to William promising him the kingdom of England when King Edward died, the breaking of this oath lead to the Norman Conquest and the Battle of Hastings.

The Bayeux Tapestry is 68m long and 50cm tall and depicts the events leading up to the Norman Conquest and the Battle of Hastings culminating in the death of King Harold. The embroidery depicts more than 600 characters, forty ships and hundreds of animals and mythological figures. It was originally displayed for two weeks each year in Bayeux Cathedral as a means of educating people, many of whom were illiterate, about the event.

The Musee Memorial De La Bataille de Normandie shows the events of the WW2 invasion of Normandy which commenced in 1944. It gave details of those involved on both sides, the equipment and weapons used, and the stark realities of how many died. On the opposite side of the road is a War Cemetery again bringing home the horrors of war.

We spent the evening in a van of a Welsh couple and their Jack Russell dog that Layla had befriended, it was good to share a drink and find out about each other’s experiences, they have recently retired, rented out their house and are the road for a year.